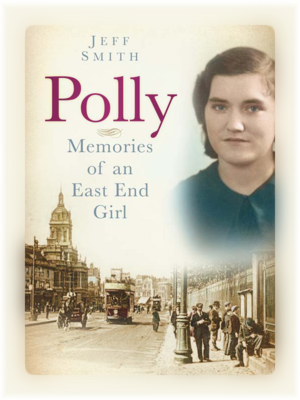 In the tumultuous first-half of the twentieth century London's East End was at the very sharp end of history. It was severely battered by war and peace, bombed in both wars and in between suffered levels of poverty and deprivation that now seem barely credible. Mary Rebecca Smith (known to family and friends as Polly) lived through these times and witnessed them first-hand. She was bombed by Zeppelins, in the Blitz and was eventually 'bombed out' by a V1. Between the wars she witnessed the desperation and destitution of the Great Depression — families living on the street, people literally penniless to the edge of death, and even a riot by jobless from all over the country in her own street! As part of a typical, close-knit, East End family there were also times of fun and enjoyment.

Polly had a natural gift for storytelling and this book is a collection of her stories about those times as she remembered them and in the words she used. They are told with insight, wisdom, passion and humour. The stories are arranged in broadly chronological order and offer a fascinating social history as well as a very personal story of an apparently ordinary life lived through the most extraordinary of times.

First published in 2012 by The History Press